The social events comprise a joint NMR/DL welcome reception on July 17 at Nelson's in the TU Wien main building as well as a guided tour through the Musikverein Vienna and a dinner at the hotel Castle Wilhelminenberg on July 18. The meeting point for the social event on July 18 is in the EI at 16:30, right after the coffee break.

The joint NMR/DL welcome reception takes place on July 17, 19:00-21:00, in the Nelson's Bar in one of the court's at the TU Wien main building at Karlsplatz 13. You can reach Nelson's by taking the entrance of the university at Paniglgasse 14, 1040 Vienna (see map), or the main entrance at Karlsplatz 13.

After the guided tour, buses (from the Dr. Richard bus company) will depart at 19:00 to Castle Wilhelminenberg in front of the Musikverein building (see map on the right). 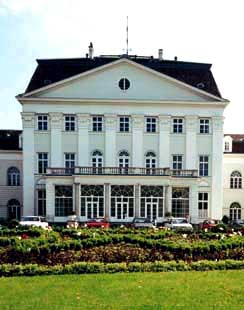 The workshop dinner will take place at the Hotel Castle Wilhelminenberg, located in the north-western outskirts of Vienna.

The address of the hotel is Savoyenstraße 2, 1160 Vienna.

There will be buses back to the Musikverein building which will be off at 23:30.

If you prefer to go to the dinner directly by public transport, you can take the following connections: